Huaraz is the hub for your Andean adventure trips in Peru, as the gateway to two of the world’s most breathtaking ranges, the Cordillera Blanca and Cordillera Huayhuash and many other shorter day hikes. As a low-key adventure town, it is a mountain lovers’ paradise and a blend of modern and native Andean culture.

Unlike Machu Picchu and its gateway Cusco which have become very popular, Huaraz has remained relatively untouched and raw, thus keeping the two magnificent mountain ranges that can be accessed from here: Cordillera Blanca and Cordillera Huayhuash for the real adventure lovers.

During the season (April to September) it is a lively place with trekkers and backpackers preparing for their next adventure or just returning from a gruelling few days in the mountains. In fact, July is the ideal time to visit this area; the weather is very pleasant with very little chance of rain. During this time, which coincides with Peru’s event celebration dates,  almost every night there is entertainment including live music, food and more organised by the town. October to March, especially during January and February weather is wet with higher chances of rain.

It is the base of many agencies, outfitters and gear rental companies who plan, organize and supply equipment for expeditions, treks and adventure sport activities.

Huaraz has an elevation of 3050m / 10,000ft which makes it an ideal base to acclimatise before heading out to the surrounding mountains.

A major earthquake in 1970 destroyed the city and it got rebuilt subsequently. Today it has a population of ~120,000.

While Huaraz is not a picture perfect Alpine town in the mould of Chamonix or Interlaken, it has its own charm with many good cafes and restaurants and a history linked to its Quechaun heritage which makes its unique amongst many mountain gateways you would have visited in other parts of the world.

If you are traveling to Huaraz from anywhere outside of Peru, you will have to transit through Lima. Lima has direct connections with quite a few cities in the USA and Canada through Delta, United, American, LATAM, Air Canada and with Europe through KLM, Air France, British Airways, Iberia and LATAM. From other Latin American countries, LATAM and Avianca offer good connections. An Airport Express bus  (typical fare USD ~8 one way) connects Lima city centre with Jorge Chávez Airport in regular intervals, from 06:00 to 22:00 hours. Taxis cost USD ~15 one way.

Huaraz is well connected with Lima by bus. The distance is ~400km and the journey takes around 8 hours and is reasonably priced ($11 – 29 one way) and services are generally quite reliable. Main Operators are Movil Tours, Cruz del Sur, Lenea and Oltursa. Note that in Peru each bus company often has its own separate terminal. In Lima, the main bus terminals are in Javier Prado, La Victoria, Terminal Plaza Norte, Aramburu and Paseo de la República.

Flights from Lima to Huaraz are operated by LC Peru, with daily one flight on Tuesdays, Thursdays and Saturdays. The airstrip in Huaraz is ~23km north of Huaraz, you can take a combi (USD ~1) or a taxi (USD ~10 – 16) to Huaraz town. Flights are temporarily suspended due to financial difficulties being faced by the airline.

Walk the paths while absorbing Nature

Huaraz has ample options for lodging at a reasonable price. Depending on your requirement and budget, you may choose your accommodation in Huaraz from a range of hotels, guest houses and hostels.

Multi-day Adventure trips out of Huaraz, with approximate duration

Shorter duration trips out of Huaraz, with approximate duration

Attractions in and around Huaraz 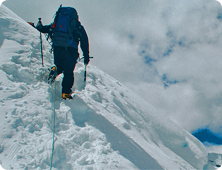 Climb the pyramid shaped Alpamayo, one of Peru’s highest peaks

Conquering summits is no foreign feat to you, and you would like to add a Peruvian peak to your list of achievements? The Alpamayo Circuit trekking and 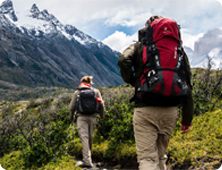 Cordillera Huayhuash: An unforgettable traverse through the heart of Peruvian Andes

Trekking in Cordillera Huayhuash, part of the world’s longest mountain range, the Andes, is relatively less known compared to the popular Inca Trail in…... 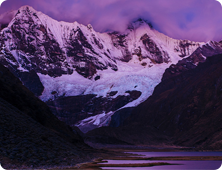 The sound of silence, breathtaking views of the Andean mountains at day and of the starry sky at night, surrounded only by wildlife you had never seen before… That is exactly what is awaiting you if you decide to take the road less travele…... 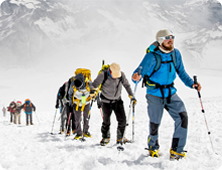 An introduction to the Cordillera’s summits: the Pisco Climbing Expedition

Whether you are looking to practice your limited mountaineering skills or to acclimatize for a coming big climb, the 360° views over the Cordillera from the top of Pisco mountain will mesmerize you. Novice mountaineers and experts alike will …... 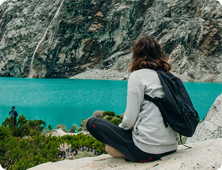 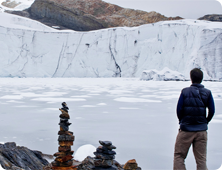 Melting Away: the Pastoruri Glacier

Huaraz is known to be the starting point of some of the most challenging treks and climbs Peru has to offer. But if you’re looking to discover the beauty of the country in a more relaxed way, should you completely dismiss the Cordillera Bla…...