Gaining altitude to access some of the most remote areas of the surrounding mountains is what drives ski tourers. Skinning up your skis and climbing uphill can be challenging but the reward of being away from the crowds is worth every effort. The Sellrain Valley, in which Innsbruck is nested, is a paradise for ski tourers and offers amazing tour options for all levels. Making a choice between so many exciting adventures will be difficult, so let us help you by telling you more about some of the most popular touring routes in the area.

Lampsenspitze is one of the most popular ski tours in the Sellraintal Valley, and for good reasons. Offering a variety of sun-basked routes, this path is ideal for beginners and experts alike. The risk for avalanches is much lower than on the other routes in the region, and it is also Austria’s first ski touring educational trail. Indeed, while you enjoy your climb up, you can deepen your knowledge about avalanche awareness and safe tour planning by reading the display boards strewn along the way. After this tour, you will be ready to tackle more hazardous routes!

Visible from Innsbruck city center, this steep couloir will be calling your name. A great mix between mountaineering and ski touring, the Roskogel Nordrinne is a real challenge for experienced ski tourers. After riding the Rangger Kopfl lift system, you will be ski touring until you reach a rocky ridge. From there, it’s all on foot until you reach the summit of the Rosskogel. After having enjoyed the panoramic views, put on your skis for an exhilarating ride on the 40-ish degrees descent before rejoining the open slopes and, later, you will reach the village of Oberperfuss where it all started.

Offering an incredible view from its summit, the Serles route is incredibly rewarding. While best done in springtime, this tour can also be enjoyed in winter – in which case you will have to skin up from further below up to the parking place near Matrei am Brenner where the route starts. From there, climb up the bowl and cross the 5-meter-wide couloir giving access to the seemingly impenetrable cliffs. At the end of the couloir, the open face of the South side will open to you and you can decide whether to skin it up or bootpack it – your guide will be able to advise you depending on the conditions. Soon enough, you will reach the summit and understand what makes this route so rewarding. The views over Innsbruck, the Ortler and Stubai mountains, and of almost your entire ascent route will give you enough to be proud of. The descent is just as much fun and takes the same way as your ascent, so expect some bowl and tree skiing.

Taking you through the beautiful Kalkogel range, this tour will leave you breathless. Considered as one of the best ski touring adventures in the Tirol region, this route will take you the whole day and leave you feeling exhausted but content and proud. You will start by taking a chairlift all the way to the top of Olympabahn and ski back down to the Hoadlsattel Col. You will then have to hike up for 15 minutes to the start of the route on the large plateau of Axamer Lizum. That’s where the real adventure starts. Start skinning up to the col on the far right, bootpack when needed, then descend faster than ever to the Schlicker Alm mountain hut for lunch. After having enjoyed a well needed meal, you will take another lift to reach the start of the climb of the Schlicker Schartl Col. You will have gone through the hardest part of the route at this point, so it is only enjoyment from now on! Ski back down closer to the village and reward yourself with a hearty mountain dinner.

You have experienced ski touring and are hooked, and want to take your new hobby further? The ATC Avalanche Training Centers in Paxmar and Kuhtai offer courses in searching for avalanche victims, a training that could be extremely useful considering the serious avalanche hazards of ski touring. You can also decide to take part in a multi-day program at a Snow and Avalanche Awareness Camp (SAAC) and specialize in a backcountry skills clinic. With these training sessions, you can be sure that your next ski touring adventure will be safer and more enjoyable!

Ski touring from Innsbruck will take you in remote areas of the Sellrain Valley, very often considered inaccessible for regular skiers and offering untouched powder snow in front of breathtaking views of snow-capped mountains. If you are in Innsbruck and want to get off the beaten path, skin up and take part in the backcountry experience! 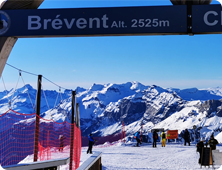 You love being on skis, but the crowded runs of your ski resort make you miss the peaceful mountain air that you were seeking? Ski Touring and 9 April, 2021 | Reccy Guide 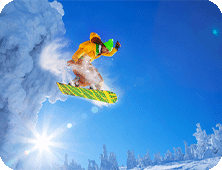 Riding down the slopes in Zermatt

Zermatt is known worldwide for being home to some of the best ski areas in the world. The Matterhorn ski paradise, named after the iconic peak towering over the slopes, is the highest ski area in Switzerland and offers over 360km of descents for …... 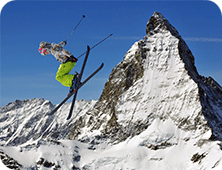 Off-piste riding is considered to be one of the most rewarding skiing or snowboarding experiences around the world, and most particularly in the Alps where the options are endless. Zermatt does not escape the rule, and the region offers incredibl…... 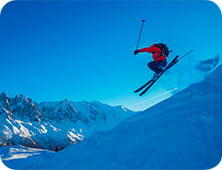 The Vallée Blanche : A skier’s paradise

The Chamonix Valley is known to be a heaven for thrill-seekers, offering spectacular runs with breathtaking views. But mention the Vallée Blanche to any seasoned skier or snowboarder and the adrenaline will start rushing to their head more…... 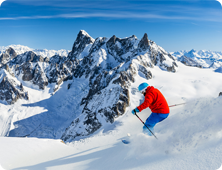 Freeriding your way through Chamonix

Known for being surrounded by incredible massifs and the mythical Mont-Blanc, Chamonix is also known to be the mecca of freeriders in the Alps region. The town and its surrounding ski resorts have a worldwide reputation for offering top-shelf ski…... 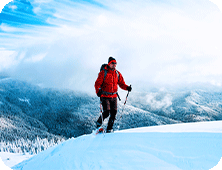 Thrill-seekers will find endless inspiration as they explore the alpine peaks, crystalline waterfalls, and lush, sweeping valleys of the Jungfrau region.  Mountain, air, and water, the region offers ample opportunity for adventurers to push …...