Amidst the natural and rustic surroundings of the region lies the town of Pokhara, the capital of Gandaki Pradesh. Pokhara is situated at a distance of 200 km from Kathmandu, which is the present-day capital of Nepal. Pokhara is the gateway to multiple trekking routes, the two most popular ones being the Annapurna Circuit trek and the Annapurna Base camp trek. Nestled at the foothills of the Annapurna massif, on a clear day, the town offers the visitors with spellbinding views of multiple eight-thousander peaks including Mt. Manaslu, Mt. Annapurna, and Mt. Dhaulagiri.

The town is tucked in the fascinating Pokhara valley. The Seti Gandaki river, which flows through Pokhara, has carved several impressive gorges in the vicinity of the town. Pokhara is flanked by Phewa Tal, a lake covering an area of 4.4 square km. Pokhara is also known as a city of lakes in Nepal because of the many lakes that are situated in and around the town. The city is famous as a gateway to thrilling treks, while backpacking tourists also have a lot to do here. Pokhara offers unlimited options for outdoor activities and entertainment, whether you are traveling solo, with family or as a group of friends.

Deemed as the tourism capital of Nepal, Pokhara boasts a variety of cultural festivals and traditional rituals amidst its natural surroundings. Also, it is home to the legendary Gurkha soldiers.

Pokhara conducts several religious and world music festivals, generally on the scenic lakeside, throughout the year, thus it witnesses an influx of backpackers and adventure lovers from across the world. The notable ones include Street festivals, Bloom festival, Holi Music Festival, Annapurna, and Phewa festival. They are usually commemorated by local and international folk music and dance, food, parades, processions, rides, handicraft stalls, and many more attractions.

Apart from having a unique cultural side, Pokhara is the base camp for multiple adventure activities, including Skydiving, Ziplining, Rock climbing, Paragliding, Bungee jumping, and Boating in serene waters of the lake. There are quite a few operators and guide agencies in the town to take you around and give you one of the most adrenaline-pumping experiences of your life. Make sure you negotiate and get a good deal or book online.

Pokhara is also very popular for Ultralight flights, a form of aerial sport, which delivers an exciting ride in a plane over the town with great views of the surrounding mountains and glaciers.

In good weather, the charming town and its lush, serene surroundings offer ample opportunities to relax in between activities and bask under the Himalayan sun while drinking local Nepali tea. However, considering the hilly terrain, the weather in Pokhara is unpredictable and can leave you drenched without much warning; hence it is advisable to carry protective clothing for rain and cold weather.

Phewa Lake, the largest freshwater lake in Nepal, is situated in the southern part of Pokhara and is buzzing with activities. You can go for an early morning run or stroll while enjoying the views of the mighty massif, or take a short hike to Sarangkot, or visit Mahendra Gufa.

While it is still relatively raw and rustic, gradually Pokhara makes an endearing place in the hearts of tourists and adventure lovers.

Buddha Air, Yeti Airlines, Shree Airlines, Nepal airlines, among others are a few flight services, operating between Pokhara and Kathmandu and a few other destinations in Nepal and India.

By bus you can reach Kathmandu from New Delhi and other major cities in North India. The main inter-city bus station is at Gongabu. From Kathmandu, it is a 7 to 9 hours’ drive, covering 200 km of distance to Pokhara.

There are motorcycles, bicycles, and SUVs available for rent to move within the city.

Lakeside (north and south) is the best location in Pokhara to select a cozy accommodation. There are several hotels, homestays and hostels, ranging from luxury to budgeted rooms. Not only the location presents amazing mountain views but also buzzes with daily routine, cultural programs, and numerous international backpackers.

Pokhara is also known for shopping zones around Lakeside and Mahendrapool Bazaar. Interesting local items include handicrafts, thangka, pashmina, metal trinkets, and wood carvings. Amongst other commodities, Gurkha knife, Nepali tea, singing bowls, masks, carpets, and jewelry are very artistic. There is a rule in Nepal: anything more than a century old is not allowed to be taken out of the country, which needs to be followed. 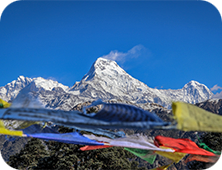 For outdoor enthusiasts, there are some adventures that seem to call your name. The opportunity to trek through the Himalayas in Nepal – let alone climb the peaks &nd…... 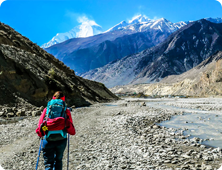 Nepal offers adventurers the chance to hike through some of the most remote and rugged terrain in the country around Dhaulagiri Trek. During this three-week…... 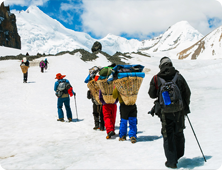 The Upper Mustang Trek offers you a chance to explore an arid desert and dip into the history of the last forbidden kingdom lying in the border of Nepal and Tib…... 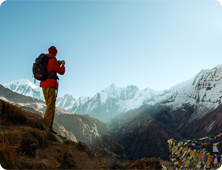 A journey to the base of Annapurna, a mountain revered by climbers

The Himalayas have drawn travelers from around the world for over two centuries, and it’s not hard to understand why. This epic mountain range boasts a collection of the tallest mountains on the planet, including Annapurna. Although it&rsqu…... 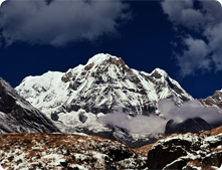 Annapurna is a 55 km wide massif comprising Annapurna I Main (8091 m), the tenth highest mountain in the world, Annapurna II and III, and several other seven and six-thousander peaks. What sets Annapurna apart from the other eight-thousanders is …... 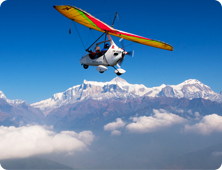 Choosing to embark on an Ultralight aircraft flight in Pokhara is a simplistic, low-effort way to experience the beauty of the Himalayan mountain range.  Pokhara, the third-largest city of Nepal, is a popular tourist hub. International trave…...