The Frozen Path to Kuari Pass

The Winter Kuari Pass Trek is perhaps best known for offering travelers a rare glimpse of the Nanda Devi, which stands at a dizzying height of 25,643′. Although undoubtedly a highlight, this iconic peak is only the tip of the iceberg. The 33 km journey through the stunning Garhwal peaks provides more jaw-dropping moments than most people experience in a lifetime, with countless opportunities to lose yourself to the Himilayan wilds.

The trek is generally rated easy to moderate, meaning that those with a fairly basic knowledge of hiking should be able to complete it without much trouble. Starting from Dhak, a small village in Uttarakhand in the Garhwal region, the trek loops through the Nanda Devi National Park and over the Kuari Pass, winding through spectacular snow-capped peaks before reaching the final stop in Auli. Although it is possible to complete the route in reverse by beginning in Auli and ending in Dhak, this is generally not recommended because it allows less time to acclimatize to the altitude.

Most hikers begin their winter Kuari Pass trek in the ancient city of Haridwar. Haridwar (also known as Hardwar) is the holiest Hindu city in Uttarakhand. It lies at the junction of the Ganges River and the Himalayas and attracts millions of religious pilgrims every year, all looking to bathe in the sacred water. As well as being a popular jumping-off point for numerous treks, the city is an exciting destination in its own right. It’s common for hiking groups to regret not spending longer here to explore the many temples and sacred bathing spots before heading off on their mountain trek.

Haridwar boasts an abundance of tour companies, most of which include the transfer to Joshimath in the cost of the tour. The drive between the two is around 10 hours and offers incredible views of the cities and surrounding mountains to whet your appetite. On day two, trekkers will enjoy a shorter drive to the village of Dhak, where the trek really begins.

The trail opens with a steep, gradual climb through a series of quaint villages. The views begin almost immediately, with open vistas overlooking the vast grasslands and forests ahead. You will also catch your first glimpse of the Dronagri and Hathi Parvat peaks, rising in the distance. Hikers will cover a distance of around 6kms as they make their way to the campsite at Gulling Top.

On day three, trekkers will make their way through dark, snow-covered oak forests, teeming with rarely sighted Himilayan wildlife. If you’re lucky, you might catch a glimpse of snow leopard tracks as you climb the steep trail up to the campsite. Your guide will be able to point out the many species of birds that inhabit the forests and teach you how to identify their haunting calls. The trek up to the camp is around 6km but in the thick winter snow can feel further.

Day four is probably the most scenic day of the trek, taking in an 8km loop across the Kuari pass. The first half of the hike is via a steep uphill trail, which flattens out as you approach the pinnacle. As you climb, you will be treated to views of rolling snow meadows and frozen mountain streams, that stretch as far as the eye can see. Once you reach the Kuari pass, you will begin to catch sight of the monstrous Nanda Devi, surrounded by a clan of snowcapped peaks including the Dronagiri, Chitrakantha, Chaukhamba, and Tali top.

The route back to the campsite offers respite from uphill climbing, with a steady downhill path back to the tents.

The last day of the trek takes you back to the jumping-off point at Joshimath. You will start by hiking around 11km to Dhak village, enjoying a gentle downhill route back through a series of small villages and meadows. From there, a driver will pick you up and transport you back to Joshimath to spend the night, before you head back to the city of Haridwar.

The Hampta Pass Trek is one of the lesser-known Himalayan treks in India. Nonetheless, it is an amazing adventure that takes you through some jaw-dropping landscap…...

The Valley of Flowers – Verdant Meadows Against a Lofty Backdrop

If you want to see a different side of India, the Valley of Flowers Trek is an absolute must. Forget about the sprawling cities and urban sights, the Vall…...

Northern India is packed full of many wonders and hidden natural gems. One such place is the glorious lake of Brahmatal. This alpine lake sits at a lofty height of 3240m amidst a crown of epic Himalayan mountains such as Trishul, Hati Ghoda, and …...

The Goecha La Trek offers a challenge and is a longer trek for those who want to push themselves physically. Over the course of 10 days, you will traverse through s…...

Sandakphu Trek – Spectacular Views of the Roof of the World

The Sandakphu Trek provides something completely different from most Himalaya treks. You get to see some beautiful countryside and natural landscapes in Singalila …... 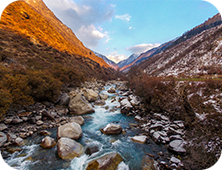 There are two main things you should know about the Har Ki Doon trek. First of all, it's graded easy, so beginners with a basic level of fitness should have …...