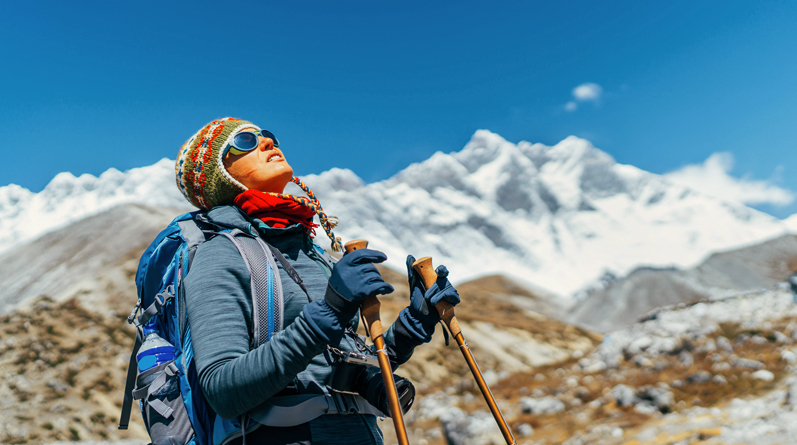 Everest Base Camp trek: Follow the footsteps of the legends

The Everest Base Camp Trek (EBC) is one of the most sought-after trips in the world, experienced by a privileged few. It offers awe-inspiring views of a concentration of some of the world’s highest peaks. The EBC from the Nepalese side is the first southern Base Camp for the expedition to Mt. Everest (8848m). Every year from March to May, the adventure troupes set up their large managing tents here to monitor the climbs by many of the world’s top mountaineers. Owing to the conducive weather, especially in May, a large number of mountaineers attempt the summit of Mt. Everest.

In the last few years, the number of trekkers visiting Nepal to trek Everest Base Camp (EBC) has increased exponentially. Every year, around 35,000 trekkers and backpackers hike to the EBC at an altitude of approximately 5,380m.

The Advanced Base camp (ABC) is around 12 km from the EBC. Only the Sherpas, porters and experienced mountaineers are allowed to trek to the ABC. However, the EBC hikers get ample opportunity to explore the EBC which today has become no less than a township with its motels, mini-cafes, hotels and restaurants which sell cup noodles and pork for the trekkers to vanquish their hunger after an arduous journey, albeit at a significant premium to the price at which they are available in the towns and villages.

The trek to the EBC starts at Lukla, which is considered by many as one of the most dangerous airports in the world with a short runaway nestled between mountain ranges. Lukla is situated at an elevation of 2926m and it frequently experiences uncertain and harsh weather. Hence, for the trip from Lukla to Phakding, an extra day is generally budgeted for to factor in any weather-related delay.

The hiking-trail of EBC starts at Phakding amidst its local inhabitants, their huts and cottages, and local flora and fauna, which stand for Nepalese traditions, culture and its unique biodiversity. Being the birthplace of Lord Buddha and with a large number of followers of Buddhism, Nepal has many stupas and monasteries. The trek to Namche Bazaar is a simple hike, but it involves a considerable gain in altitude to 3,444m. Here you can explore local artifacts and handicrafts, visit the Sherpa Cultural Museum from where you can also clearly observe Mt Everest and Ama Dablam (6821 m). Namche Bazaar is famous for its pubs, internet cafes, bakeries, and a buzzing nightlife probably designed to chill and warm up before the onset of the trek. The North Face shop in Namche Bazaar attracts mountaineers and hikers who splurge on trekking accessories and gear at a relatively cheaper price.

EBC is a relatively simple hike except for the higher altitude, which can be dangerous if your body is not acclimatized adequately. The trail which traverses through the villages of Phakding, Namche Bazaar, Tengboche, Lobuche, Gorakshep, and Pheriche is an epitome of Nepal’s pristine beauty. The friendly villagers are always ready to guide you with direction and navigational help in case you miss the route or are lost midway from your group. Also, as you gain elevation, hand in hand the price of the eatables and other important accessories also shoot up. We advise that the EBC trekkers be prepared and carry with them a few essentials like winter clothing, water disinfectant, bars, nuts, and woolen clothing. Water is costly, you will be better off by filling your bottle at the streams and disinfecting them with tablets, which you can buy in the market of Namche Bazaar or Kathmandu.

While treading up from Dingboche to Lobuche, you will cross Khumbu Glacier, which is an icefall, thus presenting a risky terrain to the trekkers. You ought to carry certain essential items while crossing this treacherous icefall, because as the snow melts, frequent breakages observed in the icefall. En-route, at Khumbu the trekkers pay homage to a memorial inscribed with names of the past mountaineers, who have lost their lives during previous Mt. Everest expeditions. Apart from this area, the hike towards EBC is an easy to moderate ascent, while experiencing the daily rhythm of the high altitudes natives and enjoying the gorgeous views of the mountains.

The trekkers are not allowed to camp at the main EBC, hence you will have to camp at Gorakshep, which is around 3km from the EBC. After establishing the camp, you will trek to EBC, return, and spend a day there. Here, many trekkers show symptoms such as headache, whooping cough, nausea or maybe fever due to altitude sickness, which will need special attention before you get ready for the descent. The next day, after a steep climb to Kalapatthar situated at a height of 5550m, you will be blessed with views of snow-capped mountains including many eight-thousanders like Cho Yu (8188 m), Makalu (8485 m), Mt Everest (8848 m), and Lhotse (8516 m). On the same day, after returning from Kalapatthar, you will start your descent to Pheriche village and further to Namche Bazaar.

The EBC trek is a trip of a lifetime, it will add a myriad of experiences to your plate of travel and adventure while letting you learn about the culture and traditions of Nepal, which is distinct from the Himalayas of India, Pakistan, Bhutan and Tibet.

The Government of Nepal requires non-Nepalese hikers to obtain two permit cards for the Everest Base camp trek: (1)  TIMS or Trekkers Information Management System card which can be obtained at Thamel in Kathmandu for USD 20 if you are solo, and USD 10 per person if you are in a group, and (2) entry pass to the Sagarmatha National Park which can be obtained at Monjo village, en-route from Lukla to Phakding for USD 30 plus taxes.

The Hampta Pass Trek is one of the lesser-known Himalayan treks in India. Nonetheless, it is an amazing adventure that takes you through some jaw-dropping landscap…...

The Valley of Flowers – Verdant Meadows Against a Lofty Backdrop

If you want to see a different side of India, the Valley of Flowers Trek is an absolute must. Forget about the sprawling cities and urban sights, the Vall…...

Northern India is packed full of many wonders and hidden natural gems. One such place is the glorious lake of Brahmatal. This alpine lake sits at a lofty height of 3240m amidst a crown of epic Himalayan mountains such as Trishul, Hati Ghoda, and …...

The Goecha La Trek offers a challenge and is a longer trek for those who want to push themselves physically. Over the course of 10 days, you will traverse through s…...

Sandakphu Trek – Spectacular Views of the Roof of the World

The Sandakphu Trek provides something completely different from most Himalaya treks. You get to see some beautiful countryside and natural landscapes in Singalila …...

The Frozen Path to Kuari Pass

The Winter Kuari Pass Trek is perhaps best known for offering travelers a rare glimpse of the Nanda Devi, which stands at a dizzying height of 25,643′. Alth…...