Nestled between the limestone spikes and spires of the Nordkette mountain range, surrounded by sweeping Alpine meadowland, the city of Innsbruck has more than a hint of fairytale charm. The fourth largest city in Austria, this Imperial gem is the point at which thriving urban culture meets the great outdoors.

Blessed with unrivaled access to some of the finest climbing routes and ski slopes in Austria, Innsbruck is a haven for adventure seekers. No matter the season, those looking to fill their lungs with fresh mountain air will find inspiration here.

Unlike other Alpine adventure hubs, Innsbruck is more than large enough to absorb the millions of tourists that head here each year. In fact, it is this international influence which has made the city one of the most exciting destinations in the country, and contributed to its increasingly multicultural feel.

With history dating back to the 12th century, it is unsurprising that the architecture here offers some of the best sightseeing in Europe. Baroque churches, Gothic palaces, and futuristic glass constructions, all stand as testament to the city’s ever evolving character.

A buzzing cafe and bar scene makes for a fantastic post-adventure wind down, and the pastries available at the myriad independent bakeries are famous world over.

If skiing is your thing then you will be spoiled for choice in Innsbruck. The City plus Ski Pass not only gives you access to 13 resorts, but also a free bus ride to all of them. The Nordkette is the closest, around 30 minutes away from the city centre, and offers 13km of slopes ranging from flat beginner territory to challenging red runs. The journey to the resort has the added bonus of taking a trip on the Hungerburg funicular, with its sci-fi style stations designed by architect Zaha Hadid.

For a slice of Olympic history, head a little further afield to Axamer Lizum, site of the 1964 and 1976 Winter Olympic ski races. Crisp, wide red runs dominate at this resort, perfect for intermediates, and the views across Innsbruck and the surrounding mountains are stunning.

The biggest glacier skiing area in Austria is located at the Stubai glacier park, which has around 160km of piste, as well as a smattering of off piste activities.

For climbers, Innsbruck offers a convenient base to explore some fantastic climbing and bouldering areas, with routes ranging from beginner to white-knuckle advanced. There are 18 major sport climbing crags in the immediate area, totaling almost 1,000 individual routes.

The best known are the Dschungelbuch and Ehnbachklamm, both of which can be reached in around 30 minutes by bike from Innsbruck, or 10 minutes by car or bus.

The Dschungelbuch, meaning ‘jungle book”, is great for bouldering, with polished rock and plenty of finger work required.

Ehnbachklamm offers brilliant beginner routes, as well as more challenging sections, and has varied terrain including slabs to vertical and overhanging patches.

The Kletterarena Seegrube is close to the city, and has 32 routes, including one grade 9. On clear days many of these trails offer panoramic views over the craggy peaks of nearby mountains, as well as a birds eye view over the picture-book Innsbruck.

The 2,662-meter Hohe Munde mountain is a great option for climbers looking to experience the Austrian wilderness, while the stunning Ehnbachklamm gorge offers a large variety of multi-pitch routes.

In the summer, the region around Innsbruck becomes a hiker’s paradise, with countless routes through the Nordkette range and beyond. You will discover guides abound in the city, ready to show you the best spots.

Innsbruck Kranebitten Airport is the largest airport in the region, with regular scheduled flights arriving from Vienna and Frankfurt. It is also possible to fly into Munich Airport, which is a 2.5 hour drive from the city.

Innsbruck has a history dating back to the 12th century

As with most large cities, there is a huge range of accommodation options in Innsbruck. Budget travelers will find dorm rooms for as little as $20 a night, and campsite plots also provide a great deal.

Mid-range hotel rooms can be found for between $60 – $150 per night, and usually include a buffet breakfast.

There is no shortage of places to eat in Innsbruck, with everything from traditional Austrian fare, to Thai food, to American burger joints. Head to the old town for the best strudel in Austria.

With four large shopping centers in the city, Innsbruck is a great place to indulge in a little retail therapy. You’ll find the usual high street fare at Rathausgalerien town hall and shopping mall, and there’s plenty of designer names at Kaufhaus Tyrol. Innsbruck is also an ideal place to shop for the latest winter sports gear. 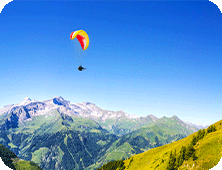 Paragliding in Innsbruck: Admire the Tirolean mountains from the top

The beauties of Innsbruck and its region can be enjoyed from the ground, but there is no other way to appreciate its vastness and splendor than by flying over it. Getting a bird’s-eye view of the mountains around is a spectacle that not man…... 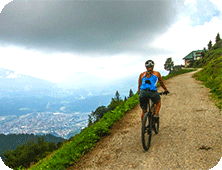 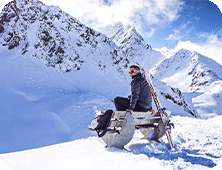 Gaining altitude to access some of the most remote areas of the surrounding mountains is what drives ski tourers. Skinning up your skis and climbing uphill can be challenging but the reward of being away from the crowds is worth every effort. The…... 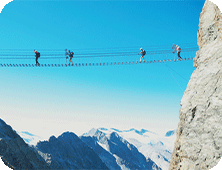 Klettersteig in Innsbruck: thrilling via ferratas for families and experts

While Europe at large is a paradise for via ferrata lovers, Austria is most likely the country with the highest number of routes. With over 500 different via ferrata, Austria is sure to be a delight for all – no matter your skills and no ma…...