Kathmandu is the capital of Nepal, which is a landlocked country. It is flanked by India in the south, east, and west, while the north is fenced by China. Nepal is located in the cradle of the Himalayas and offers a rich bounty of natural beauty and adventurous terrain to travel enthusiasts. Home to one of the highest concentrations of high peaks, it is an enthralling cultural legacy, preserved since ancient times. Kathmandu, also known as the city of temples, is seasonally flocked by mountaineers, trekkers, and tourists from all over the world. Other than Himalayan mountains, the city is also the gateway to lowland jungles down south with magnificent wildlife.

Kathmandu is the cultural and political capital of Nepal, accommodating the  diverse Nepalese communities from throughout the nation. What separates the city from other towns in Nepal is its acceptance of modern development and civilized living while maintaining the original customs. The influx of tourists from the world has influenced the lifestyle of its inhabitants, however they continue to retain and value their ancient traditions.

Visiting Kathmandu will hardly make you feel secluded because it is equipped with upscale hotels, restaurants, cottages, modern facilities, and amenities to offer a comfortable and in some cases even luxurious stay. The local population mostly follow Hinduism and Buddhism, which is why you will observe frequent colorful processions including masked dancers making their way through narrow lanes. It is said that these masked dancers are seemingly possessed by the spirits.

Kathmandu, view on a clear day

Kathmandu is said to be blessed by a living goddess who is, apparently, an incarnation of Goddess Teluja. Worshipped everyday by Buddhist and Hindu devotees, this Buddhist girl has garnered a lot of fame in Nepal for her divine presence within the masses.

Kathmandu is diverse and exceptionally classical with brilliant wooden architecture accompanied by artistic carvings and metal craft artifacts, which epitomizes the sheer talent of early Newar artisans. One of the most striking examples of Nepalese architecture is Durbar Square, which is a UNESCO World Heritage Site, located at the center of the city. The Durbar Square comprises several temples, which appear like pagodas, and are exquisitely carved in metal and wood. It is interesting and pleasantly surprising that these places are home to sculpture and artifacts that date back to the 18th century.

In contrast, Freaky Street is one of the oldest streets in Kathmandu, which narrates tales of the 1960-70s’ hippie culture. Also known as Jhochhen Tole, it is located very close to Durbar Square. Although the street no longer possesses the same charm as old, it has many souvenirs shops, trekking agencies, guest houses, and restaurants for the tourists and trekkers.

While a bit chaotic, the city offers an enjoyable getaway to tourists as well as for those seeking to cross the line and be more adventurous.

Kathmandu is also famous for the Pashupatinath temple as well as Swayaambhu, and Boudhanath stupas, which are World Heritage sites of Buddhist pilgrimage. Ranked as one of the top travel destinations in the world, Kathmandu is situated at 1,400 meters above sea level and has very pleasant weather almost throughout the year.

Kathmandu’s Tribhuvan International Airport is directly connected to major cities in India, China, rest of South Asia, South East Asia and West Asia and to the rest of the world by transiting through New Delhi, Istanbul, Dubai, Abu Dhabi, Singapore, Bangkok and Hong Kong. It also has direct flights to Pokhara, which is another tourist and adventure hub in Nepal.

By bus you can reach Kathmandu from New Delhi and other major cities in North India. The main inter-city bus station is at Gongabu.

Being an established tourist center, Kathmandu has a wide variety of lodging options, including upscale five-star international chains, boutique hotels, budget hotels, homestays and hostels. Price can vary significantly based on the time of the year and the type of accommodation you are seeking. While the standard of service is quite predictable, we recommend not to pick very cheap options, unless of course you are backpacking and are willing to take some surprises in your stride.

The interesting areas for international tourists to stay are: (a) Thamel, which is a prominent tourist hub with a plethora of options for hotels, homestays, meditation and yoga centers and live music pubs; (b) The old city of Bhaktapur, a historic town around 40 minutes from the city center; (c) Lazimpat, located close to Thamel and home to high end luxurious hotels; and (d) Patan, a beautiful part of Kathmandu and home to one of the famous Durbar squares.

Where and what to shop?

Kathmandu is known for Pashminas, Thangka scrolls, singing bowls, khukuri (Knives), Jewelry, Handicraft, and local artifacts. These are available in a variety of shops in Thamel. Furthermore, Kathmandu, being a basecamp, is also known for cheap and second-hand trekking gear. Multiple shops trade in the same.

As far as eatables are concerned, Laapsi, Titaura, Chhurpi and Nepali tea are also popular. 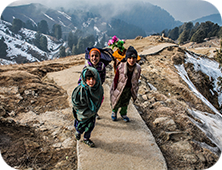 Makalu Base Camp Trek – Adventure to the 5th Highest Peak

While Mount Everest may be the tallest mountain in the world, it’s certainly not the only giant in the Himalayas. Makalu Peak is the fifth highest peak in the world a…... 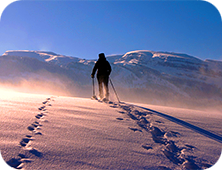 The Himalayas are comprised of roughly 50 mountains, each of which has its own unique structure and allure for visitors. Trekkers, climbers, and mountaineers of various ski…... 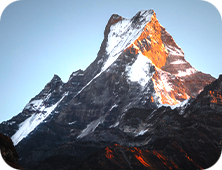 Mardi Himal Trek – A Taste of the Himalayas

Nepal is home to the beautiful Himalayas, and thousands of travelers visit the region each year to explore their snow-capped peaks. Most of these visitors end up trekking t…... 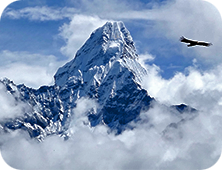 The Himalayas in Nepal have been beckoning adventurers to explore their snow-covered peaks for nearly two centuries. Today, thousands of hopeful trekkers walk through the a…... 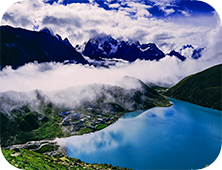 High Above the Treeline: Gokyo Lakes and Everest Base Camp

Mount Everest is the highest peak in the world at an astounding 8,848m. Every year, thousands of trekkers, climbers, and mountaineers travel through the Himalayas for unbea…... 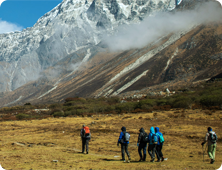 Voyage to Kanchenjunga: Five treasures of the Himalayas

While Everest may hold the world’s attention for being the tallest mountain, Kanchenjunga scrapes the sky at 8,500 meters, making it the third tallest peak globally – and the second in the Himalayas. The 29 December, 2020 | Reccy Guide